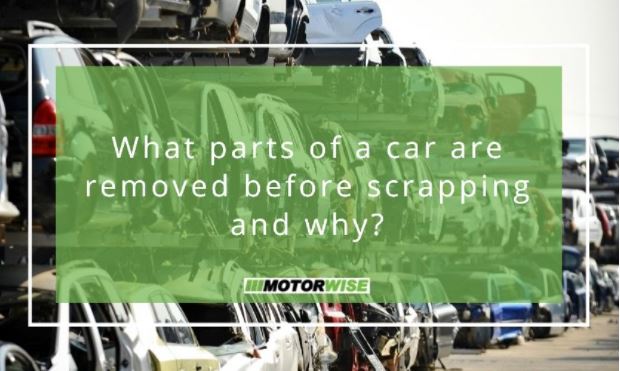 What parts of a car are removed before scrapping and why?

When people think about scrapping a car, there are many aspects to it that they don't expect, such as removing certain parts to be repurposed and recycled prior to the actual scrapping of the vehicle. Here we're going to take a look at why certain parts get removed before cars get scrapped and what these materials are then put towards.

Tyres are made from rubber, which means they can quite easily be melted down and repurposed. The melted down rubber can be put towards the formation of roadbeds and racetracks, or athletic tracks and children's playground mulch. Dependent on the condition of the tyres, they may be used on other cars too.

However, if they are too worn and are therefore dangerous to use on other vehicles, they'll be recycled instead. The recycling of just four tyres can save over 300 pounds of carbon dioxide that would be used to make fresh ones.

Window screens and other glass parts can easily be removed and installed in a different vehicle. However, glass and window screens aren't limited to only being used in other cars - they can be recycled and repurposed into things like ornaments or glass bottles too.

Up to 99% of lead-acid car batteries can be recycled, so they are always removed from vehicles before scrapping.

Not all of a car's bodywork will be removed before it is scrapped, but some of the steelwork will be taken to be melted down into new flat sheets. This is then used on construction sites or to form new bodywork for vehicles. Steel is one of the most recycled materials in the UK, so as much steel as possible will be removed from the vehicle.

Catalytic converters can be extremely beneficial to the pharmaceutical industry as a result of the palladium, rhodium and platinum elements that form them. However, they can also be repurposed into rings, other forms of jewellery and electronic equipment.

For more information about the process of scrapping your vehicle with us at Motorwise, and whether you should save any components of your vehicle, you can contact a member of our team directly via our website and receive a free car scrap quote within seconds!