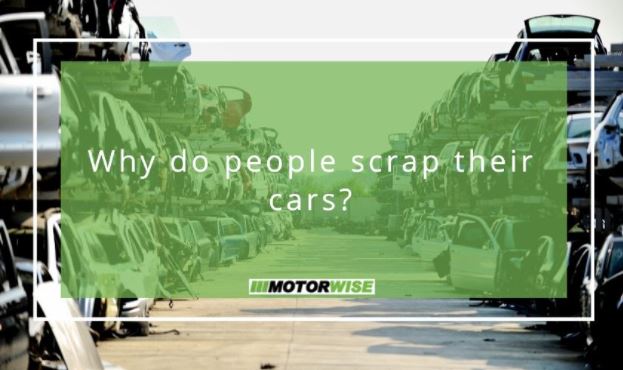 Why do people scrap their cars?

There are many reasons why people may want to scrap a car. It may have become too expensive to run, it may have been involved in a crash or it may simply be the quickest way to get rid of a car when there’s a new one incoming. Our team decided to create this blog post on the most popular reasons why people may decide it’s time to scrap their cars.

It’s become too expensive to run

Particularly with older cars, a reason as to why they’re often scrapped is that they’ve become far too expensive to run. This is because older cars are much more likely to break down and need more in-depth attention. Due to their age, parts may be in shorter supply, and so are much more expensive. In the face of this, some owners decide that they’d rather scrap their car and take the money they get from this and put this towards a new car.

Often cars that have been in a crash are sent to be scrapped. This is because it’s too dangerous to run. Not only can it be a risk for the driver, but it can also be a threat for other drivers on the road. In some cases, an insurance company will decide for a driver as to whether or not their car is a write-off and requires being scrapped.

For some, scrapping their old car is the only thing to do when there’s a new one incoming. This is because it’s a fast and 100% guaranteed way in which to clear space both in your garage and your insurance for your new vehicle. Of course, there’s always the option of selling the older car but this can be a much lengthier process. You may have to pay to upload it as an advertisement on second-hand websites, and then you have to deal with the time wasters and the haggling down to a price that’s too low. Scrapping your car can be a much easier alternative. This is because you can arrange a time for our team to come and collect the car, giving you a couple of hundred pounds – depending on the condition of the car – cash in hand.

For more information on the reasons why people may want to scrap a car, feel free to contact our team at Motorwise today.