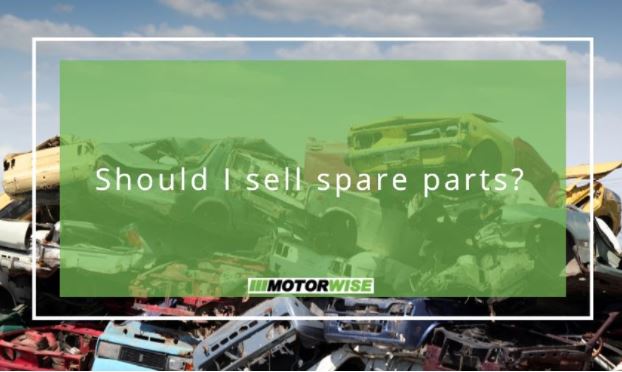 Should I sell spare parts?

One question that we’re always asked at Motorwise is whether or not it’s worth leaving all of the parts on your car before you scrap your car. Whilst it’s true that you can earn money by removing parts such as the battery and then selling it yourself, there are several disadvantages that might make you think twice about stripping your car of its parts. To help you make a guided decision, our team have decided to create this blog post.

One benefit of leaving all of the parts on your car before scrapping it is that it’s a way in which to reduce your carbon footprint. This is because our mechanics will take the sound parts from the vehicle before it’s scrapped. We do this so that parts can be reconditioned and sold second-hand. This is an environmentally friendly practice for two reasons. The first is that it can stop the production of brand new parts, which can shorten demand. By doing this, fewer toxins are released into the atmosphere. The second reason is that it can help to save other cars from being scrapped. A common reason for the scrapping of a damaged car is that the owner cannot afford the repair bill. The availability of second-hand parts means that this cost is reduced, and may save such a car from the scrapyard. This reduces scrap related toxins.

Another benefit of leaving all of the parts on your car before scrapping it is that it’s much safer than reselling the parts yourself. This is because our mechanics are fully trained and so can detect smaller faults with parts that you may not be able to, saving both you and other drivers on the road from the reselling of dangerous parts. However, if our mechanics do find a fault with some of the parts on your car, we can often recondition them. This means that when they’re resold, they’re done so with the promise that they’re up to a high standard.

A clear advantage of leaving the parts on your car is that it’s less hassle for you. Rather than being stuck with the parts for however long it may take to sell on online platforms, you can be rid of your old car all in one go.

For more information on the benefits of leaving all the parts on your car before scrapping it, contact a member of Motorwise today.