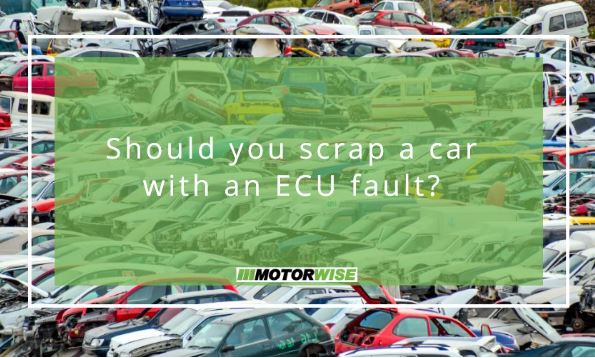 Should you scrap a car with an ECU fault?

The electronic control unit (ECU) is the brain of your vehicle. It tells the engine how fast to run when to change gears and how much fuel to use. If there's a problem with the ECU, your car could develop one or more symptoms such as stalling, changes in fuel consumption or a decline in engine performance. The ECU is the brain of your car, so it makes sense that the most common ECU faults relate to issues with the engine.

What is the ECU

The ECU is the Engine Control Unit. It’s the computer that controls the engine, and it plays a major role in helping your car run smoothly. The ECU is the main computer, which controls all of the other systems in your car. The ECU takes information from sensors around the engine to operate everything from idle speed to fuel injection. The information comes from these sensors:

Engine stalling occurs when your car doesn't start and then it stops running. It can be caused by a problem with the ECU but also just mechanical failure. It’s most likely to stall when sitting at a traffic light. Stalling isn't particularly dangerous, but it can cause damage to other components if you don't get it fixed as soon as possible. Stalling is caused by the ECU sending faulty signals to the engine.

If you notice that your car is using more fuel than normal, there could be an error in the ECU that’s causing it to send too much fuel for combustion. This will increase fuel consumption, as well as be less economical. It’s important to monitor how much fuel your car uses.

The ECU may fail to provide enough power to the engine, which will cause a decrease in engine performance. You may notice that your car struggles to start or doesn't start at all and that the acceleration is slower than usual. It may also vibrate while you are driving. Although this problem can be caused by other issues such as a faulty fuel pump or spark plugs, it's most likely an issue with the ECU itself.

Should you scrap a car with a faulty ECU?

If you have a car with a faulty or broken ECU, you may be considering scrapping your vehicle. Recycling a car is a more environmental and cost-effective option as you will be compensated for your vehicle, even if it is not currently running due to a broken ECU.

Get your free and instant online quote now!.