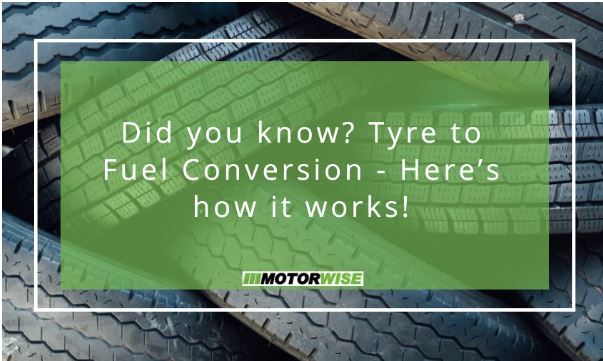 Did you know? Tyre to Fuel Conversion - Here’s how it works!

In the United Kingdom, it is estimated that there are around 1.5 million tonnes of waste tyres generated each year. Of these, only around 40% are currently being recycled. The remaining 60% are either being sent to landfill or incinerated. However, there is a third option which is becoming increasingly popular - converting waste tyres into fuel.

Not only does this process help reduce the number of waste tyres going to landfills or being burnt, but it also provides a valuable source of fuel which can be used in various applications. We take a look at how this process works and some of the benefits it offers.

How Does Tyre-to-Fuel Conversion Work?

The first step in the process is to shred the waste tyres into small pieces. This makes them easier to handle and also helps to maximise the surface area so that they can be more effectively converted into fuel. Once shredded, the tyres are then placed in a pyrolysis reactor, where they are heated in an oxygen-free environment at temperatures of up to 700 degrees Celsius.

This process causes the tyres to break down into three main products;

Pyrolysis liquid - this can be used as a fuel oil and is similar to diesel.

Pyrolysis gas - this can be used as a fuel for heating or power generation.

Carbon black - this is a valuable by-product which can be used in the manufacturing of new tyres or other rubber products.

The end result is that instead of taking up valuable space in landfill sites or releasing harmful toxins into the atmosphere when incinerated, waste tyres can be converted into valuable sources of fuel.

What Are The Benefits of Tyre-to-Fuel Conversion?

There are many benefits associated with tyre-to-fuel conversion, both for businesses and for the environment. Some of the main benefits include the following;

Reduced tyre disposal costs - businesses no longer have to pay to have their waste tyres removed and disposed of.

A reduction in dependency on fossil fuels - with tyre-derived fuel being used as an alternative energy source, there is less reliance on fossil fuels such as coal and oil.

A reduction in carbon emissions - as tyre-derived fuel can be used in a variety of different applications, businesses can help to reduce their carbon footprint.

As you can see, many benefits are associated with converting old tyres into fuel. Not only does it help to reduce the number of waste tyres going to landfill or being incinerated, but it also provides a valuable source of renewable energy. If you are looking for an environmentally friendly way to dispose of your waste tyres, the tyre-to-fuel conversion could be the answer you are looking for.