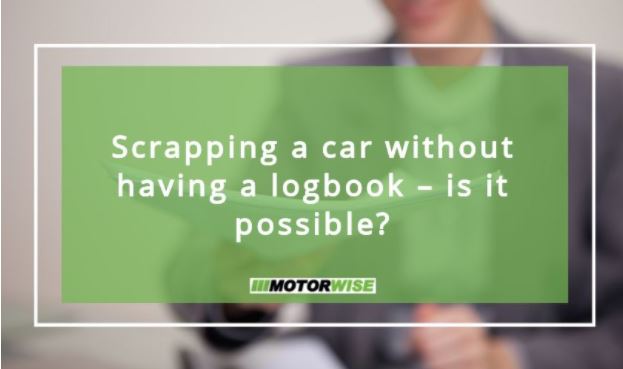 Scrapping a car without having a logbook – is it possible?

The processes involved with scrapping a car are, in general, relatively straightforward. It’s something that can be achieved quickly and without any degree of fuss, but only if all of the correct steps are followed, and everything is entirely above board.

With that firmly in mind, one of the key questions that is frequently asked when it comes to scrapping a car is whether it’s possible without the owner having the car’s logbook. For years a rumour has continued to spread around the UK claiming that, should it not be available for whatever reason, scrapping a car becomes a difficult and finickity task.

So, if it has been lost or misplaced, can you scrap your car? The simple answer is yes, and in this article, we’ll explain why that is that case, and how you can go about getting your car scrapped should you not have this document to hand.

What the law says

The logbook – often referred to as a V5 – is a document that is given to the owner of a car courtesy of the DVLA. It confirms who has been recorded as the registered keeper, highlights specific details about the vehicle’s history or performance (if deemed necessary), and is generally utilised as a part of the process of informing the DVLA when a car has been sold and therefore passed on to new owners, or has been scrapped.

However, despite this, it is not a legal necessity to be in possession of a V5 should you wish to scrap your car – though having one will streamline the process somewhat. Some scrap dealerships may demand the presentation of a V5, though very few will do this in reality. However, if for some reason you have no other option than to show one, you can buy one from the DVLA for £25.

All a dealer needs to be able to legally get on with the process of scrapping a car is for the owner of the car to provide proof of their home address and some form of photographic identification that can then be photocopied and retained to be placed in the firm’s records.

It should certainly be noted that, even if you do not have a V5 to hand, you will have to inform the DVLA of the fact that your car has been scrapped. Due to the lack of a V5, you will be unable to do this online via the dedicated form. Instead, you can simply write a letter to the DVLA detailing the date of the car’s scrapping, the scrap yard that was used, any details around the car’s sale, the make and model of the vehicle, and the registration number. If you don’t go through with the process of informing the DVLA then you could be fined as much as £100.