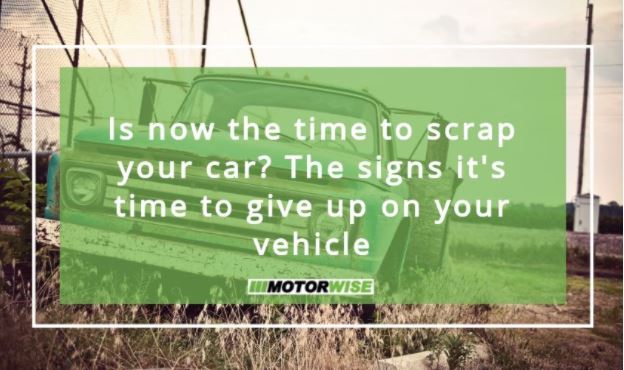 Is now the time to scrap your car? The signs it's time to give up on your vehicle

The idea of scrapping your car can seem like a last resort. Surely it can run for another six months after some tweaking and maintenance? However, sometimes, it’s essential to just sit down, accept the reality of the situation, and understand that the car you have shown loyalty to for so many years – and has been such a faithful servant – is simply unable to run any longer.

So, with that very firmly in mind, here are three signs that your car has reached the end of its life and should be heading to the scrap yard.

You are spending a lot on maintenance

All vehicles tend to require maintenance at some point in their lives. Footing the bill for repairs is part and parcel of owning a car, but if it has reached the point where you are having to replace significant parts of the vehicle, or it is breaking down more and more frequently, then it is time to consider whether or not there is a better option. The idea of spending money on a new car may be somewhat galling, but remember that you will be saving a ton of cash simply by not having to pay for the upkeep on your decaying car, so those funds can immediately go towards your new vehicle.

Your car is no longer fuel-efficient

All vehicles deteriorate over time, and if yours has reached the point where it is no longer performing efficiently in terms of fuel, it’s probably time to get rid. Filling up your vehicle can quickly become a costly affair if you’re doing it too frequently, and just as with maintenance, this all adds up. It is also worth pointing at that with hybrid and electric vehicles becoming increasingly popular, it’s likely you’ll end up recouping more money if you scrap an ageing car rather than attempting to sell it.

Your vehicle cannot be driven safely any longer

This one speaks for itself. If your vehicle has been involved in an accident, it has been written off, it has failed its MOT on a number of occasions, or you consider it in any way to be unsafe to be on the road, then you really have no other option than to find somewhere to scrap your car. While it may well be possible to pay for the vehicle to be repaired to a standard where it is again roadworthy, this is rarely the most efficient option, and will likely just guarantee further difficulties further down the line.