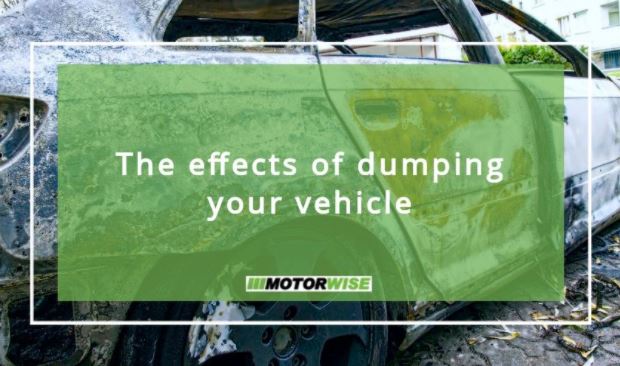 The effects of dumping your vehicle

Almost 150,000 cars are abandoned in Britain every year, with many of them left or set alight in remote beauty spots, leaving a large circle of blackened destruction.

Where's the capital of dumped cars?

According to Confused.com, Luton has earned itself the dubious title of 'Capital City of Dumped Cars', with over 360 abandoned cars in one year. The problem is spread right around the country, with the South-East generally reporting worse levels of abandonments.

Why do people do this? Many mistakenly believe that it will cost them money to dispose of the car properly and legally. Many also go on to make another big mistake - they think that by removing the registration plates, and burning out the car, the police and local authorities will be unable to trace the owners to hold them responsible. However, being caught is no small matter. Abandoning a car is a criminal offence that will stay on the perpetrator's record for good. A criminal record causes all kinds of future problems, including issues getting a job and car insurance. It can also see you awarded a fine of up to £2,500 or 3 months in prison.

Don't add arson to your crime

Setting the car alight is in itself extremely dangerous and reckless and may attract additional charges on top of the abandonment laws.

Even with fire damage and no number plates, the authorities can and will trace a vehicle - often using the Vehicle Identification Number (VIN), which is built into the car and is virtually indestructible. In addition to criminal prosecutions, many authorities have powers to charge the owner of the car for the cleanup operation, which can be substantial.

You know it makes sense

That's a pretty powerful set of arguments against dumping your car down a country lane. A call to Motorwise can get your disposal done legally, quickly, and without hassle, even if you don't have all the paperwork. It could also leave you with a few quid in hand, so it makes no sense to consider any other way to deal with your end-of-life motor.

Dumping a car is a serious offence and there's not a single positive incentive to do it. The chances of getting caught are high and the penalties are stiff. The VIN is powerful, but all you need to beat it is a phone call to Motorwise to scrap your car.